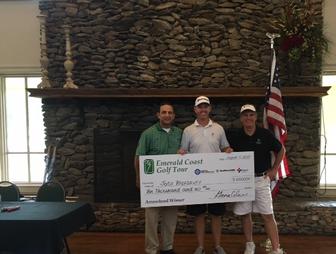 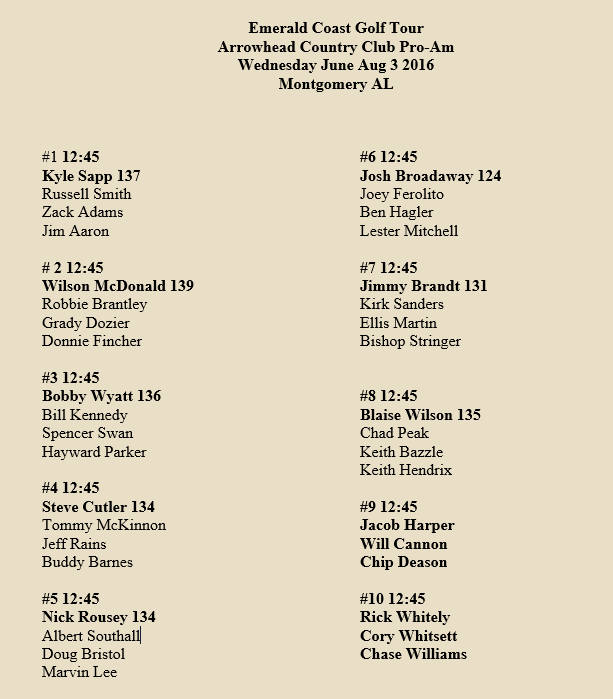 Broadaway Comes From Behind to Win in Playoff Over Brandt

Josh Broadaway won his second event in a row on the Emerald Coast tour at the Montgomery Summer Championship. Broadaway started the final round 9 strokes behind leader Jimmy Brandt who was at 12 under par after two rounds. His final round 62 which included two bogies put him at 12 under for the tournament which is where Brandt would finish after a final round event par 71. Brandt had to get it up and down for birdie on the last hole in regulation to force the playoff. He would go on to bogey the first playoff hole and secure the victory for Broadaway as he made par. The $10,000 winners check put him first on the tours 2016 money list.

Blaise Wilson of Cullman AL finished third at 6 under par 207. Bobby Wyatt and Chase Seiffert tied for fourth at 208. Jacob Harper was sixth at 210.

The pro Am was won by Josh Broadaway and Joey Ferolito, Lee White and Lester Mitchell. Thanks to the entire Arrowhead staff for their help in the event. Also much thanks to all the sponsors for their support of the tournament.