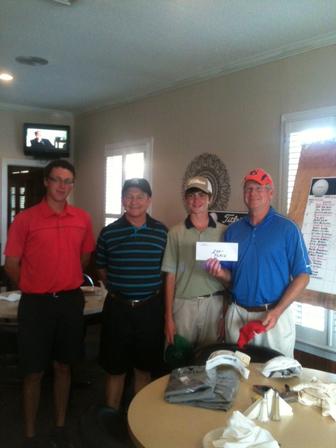 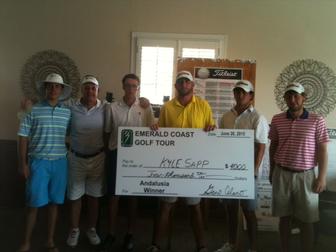 ​​​Kyle Sapp took home the $4000 first prize in a playoff over Blaise Wilson in the Emerald Coast Tour Andalusia Pro Am event. This was Sapp’s second win in the last three weeks as he won the Anniston Ft McClellan Pro Invitational three weeks earlier. Sapp had rounds of 63-68-68-199. His birdie on the first hole was just good enough to win over Wilson as he parred the first hole. Wilson who is from Cullman AL won the Silver Slipper Pro Classic back in May to get his first professional victory.

Sapp and Wilson started the final round tied for the lead and stayed tied coming in to the last hole of regulation. Both needed to make birdie to avoid a three way playoff as Wilson McDonald of Mobile AL had posted a 16 under par 200 after a final round 64. Sapp and Wilson both birdied the last hole as each one made clutch putts to force the playoff.

Zack Portemont who is from Andalusia and playing on the course where he grew up finished fourth at 203. Grant Goforth from Batesville MS finished fifth at 207.

The Pro Am was won by Blaise Wilson Mike Wells Jack McCallam and Tim Day.

A special thanks to Ralph Matthews and Sam Star and Kevin Hall and the Andalusia Country club for putting on a great event.  Also to Zack Portemont for entertaining the players a great eating spot at the Hilltop. It was a great time.

Also much thanks to Jay at J. M Jackson the Andalusia Regional Hospital and Cary at Massey Auto and the City of Andalusia for their Sponsorship support.

Sapp Wins Andalusia in a Playoff!!! 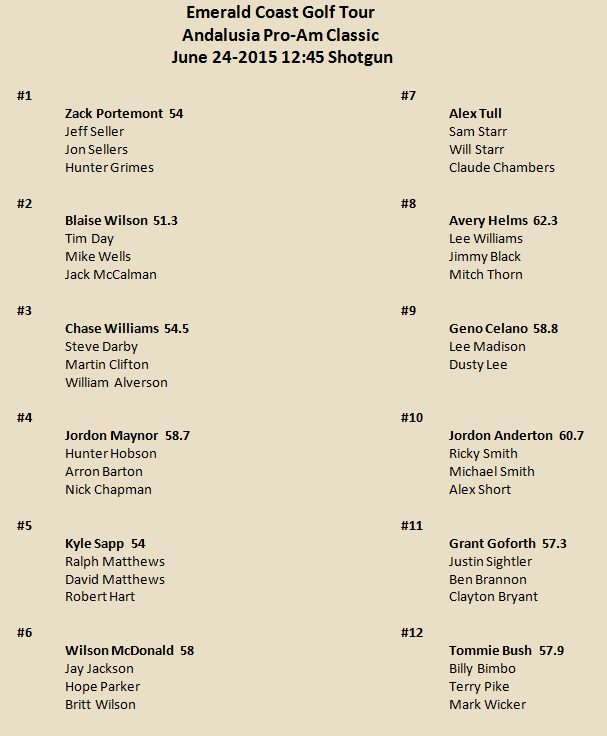