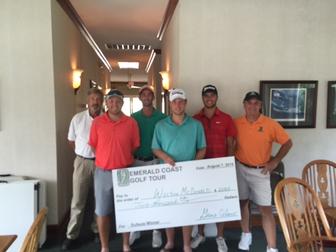 ​​​Wilson McDonald got his first win on the Emerald Coast Pro Golf tour in a breakout fashion. His 67-67-65-199 total was good enough for a 13 shot victory. His final round 65 included two bogies.

Hunter Hawkins of Ft Payne AL and Chase Williams finished second at 212. Hawkins had rounds of 69-72-71 and Williams shot 72-73 and a final round 67. Rocky Cleland of Hattiesburg MS who is just getting back to playing finished fourth at 218.
McDonald who has been steady all year had a chance earlier in the year to win in Andalusia. McDonald who played collegiate golf at UAB has now moved up to fifth on the 2015 money list.

The Pro Am was one by Chase Williams Brandon Jowers and David Davidson.

Thanks to Bill Tucker at the Country Club of Alabama for being a great host. The golf course is really looking great. Also much thanks to Steve Cox for some wonderful food at the River City Grill in Downtown Eufaula.

McDonald Gets First Win on the Emerald Coast Tour!!!