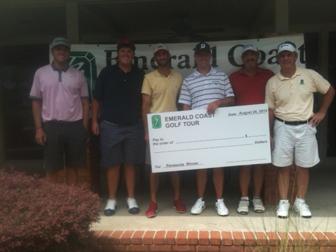 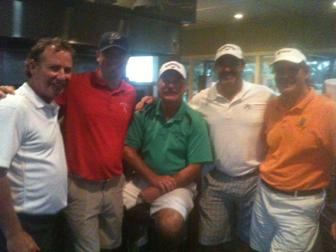 ​​​Nick Rousey got hot on the back nine to claim the Emerald Coast tour event at Marcus Pointe. His opening round of 68 gave him a three shot lead over Brewton winner Jacob Harper who opened with 71. Harper was making his move on the front nine as he turned in two under 34 and got within a shot as Rousey shot even par 36 on the front. Rousey got going on the back nine as he shot 33 for a final round 69 to finish at 137. Harper finished with a 72- 143 and tied for second with Marcus Pointe Golf Director and PGA tour veteran Ben Bates. Bates had rounds of 72-71-143.

Rocky Cleland of Hattiesburg MS finished fourth at 147. Avery Helms made his first Emerald Coast tour check as he shot 72-76-148.

The Pro Am was won by Nick Rousey Jacob Harper and Mark Naes.

Thanks to Ben Bates and Hiram Cook for hosting the Emerald Coast tour event. Thanks to Seville Quarter for a great kickoff party for the players.