Jimmy Brandt had been a regular and popular player in the field during the early years of the Fort McClellan Credit Union Pro-Invitational.

He hadn’t played here the last couple years, but he returned this year and now can add popular champion to his title.

The Auburn pro basically got around Cane Creek Golf Course on cruise control Sunday. He shot an even-par 72 and was rarely pushed, completing a wire-to-wire run to his second win of the year on the Emerald Coast Golf Tour.

Brandt, who won the ECGT event at Dancing Rabbit in March, shot 8-under-par 208 over the three days and won by three shots over Neal Grusczynski of Milwaukee. Glenn Northcutt and Brent Witcher tied for third at 213.

“Going wire to wire is nice,” Brandt said. “I haven’t won a tournament wire-to-wire in a long time.

“The biggest thing is I finally won this tournament. Maybe it helped that I played a couple years, I learned the course more and kind of knew where not to hit it and stuff like that. The experience of playing here a couple times before helped. I’m just glad I finally got the W out here.”

Former mini-tour pro Ty Cole shot 3-over-par 75 in the final round and won the amateur portion of the tournament. His three-day total of 3-under 213 was one shot better than Gary Wigington and two over Jeremy McGatha. Cole also won the net playoff of flight winners to take home all the hardware associated with the amateur side of the event, but he didn’t play particularly well.

It was his first win on the Calhoun County Tour this season and seventh since joining the Tour in 2013. It moved him into second place in this year’s season points standings behind Wigington.

“I had nothing today,” Cole said. “I didn’t hit it good. I didn’t putt it good. I just literally survived.”

Brandt was the second-round leader here in 2012, but couldn’t hold off a final-round charge by Kyle Sapp. There was no such pressure this time. He carried a two-shot lead into the round and let the competition figure a way to catch him. He played the front in 35.

“I knew I had a lead going into the day, knew I had the lead at the turn and was kind of playing defense out there and played really good,” he said. “If I wasn’t playing defense I probably could’ve made a few more putts, but I was just really just trying to make pars and not make any mistakes and let somebody try to chase me down.

“Nobody put any pressure on me so I just kind of cruised on in.”

Grusczynski finished eighth here last year with rounds of 75, 75 and 76. He shot par or better all three rounds this year.​​ 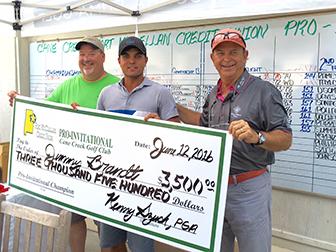