Brandt Comes From Behind to Win Dancing Rabbit!

Jimmy Brandt shot a final round 69 to win the 2016 Emerald Coast tour Dancing Rabbit event. He finished at 10 under for the event and it was just good enough for a one shot win over second round leader Nick Rousey. Rousey who is a two time winner of this event had a four shot lead going into the final day after a second round 64. After a final round 74 he would finish at 207. Tyler Klava of Pace Fl finished third at 212. Garrett Osborn was fourth at 214. Josh Broadaway and Blaise Wilson tied for 6th at 216.​ 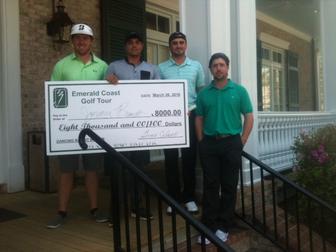