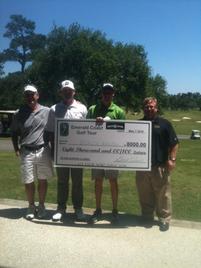 Blaise Wilson sucessfully defended his Silver Slipper title as he won the event for the second year in a row. Last year the event was played on the Cardinal course and this year the event was moved to the Pines course. His 71-70-68-209 total shared the 54 hole tournament lead with Nick Rousey of Pensacola FL. After  four holes in a playoff Wilson made birdie to claim the victory. He colected $8000 for the win. There was athree way tie for third at  213 with Kyle Sapp Chase Seiffert and Wilson McDonald. There was a three way tie for sixthat 215 between Web. Com tour player Michael Arnaud Second round leader Tyler Ledet and Jacob Harper who had the low round of the tournamet with a final round 64. The Pro Am was won by Jimmy Brandt  Vince Altese Audrey Cone and Mike Cone.

Thanks to John and Baxter for their support of the Emerald Coast tour Silver Slipper Pro Am event at Diamondhead. Also a special thanks to the Diamondhead staff for their hard work of the event.​