Michael Johnson played some great golf as he won the Emerald Coast tour event at Highland Oaks. Playing in his first Emerald Coast Tour event Johnson had rounds of 68-66-134 to win by two strokes over Andrew Dorn who finished at 136. Four players tied for third at 137. First round leader Alex Snyder who had a 65 in the first round  finished tied with Chase Seiffert, Robby Shelton and Josh Broadaway.

Johnson  had a third place finish in this year’s PGA tour Barbasol event in Auburn and will be trying to get his PGA tour card in a few weeks. It was a great field of players this week as many of them will be playing the Highland Oaks course in a couple of weeks as the first stage of tour school will be there.

We wish al players the best in the upcoming tour school sites.

Also much thanks to Highland Oaks for hosting the event and their warm hospitality. 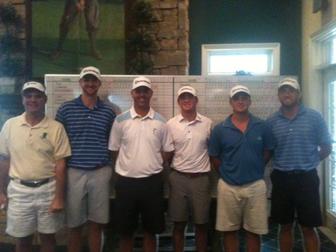