​​Nick Rousey wins his first event of the year in a spring event at Shalimar Pointe. He had rounds of 67-67-69- 203 to win by three strokes over Wilson McDonald. Mc]donald was the first round leader with a 64 and was the seciond round leader at 136. His final round 70 put him at 206 and in second place. Bobby Wyatt finished third at 212. Josh Broadaway was fourth at 220. Rousey who is from Pensacola  was steady each day and won $2500 for the win. The tournament was rained out the second day but  we completed the event with a 36 hole final day.

Thanks to Randy at Shalimar for hosting the event.

Next up is the Silver Slipper Pro Am Classic 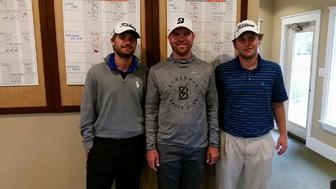