Strohmeyer Has Late Rally to Win at Bay Pointe!!!

Scott Strohmeyer had a furious rally on the back nine to win the Emerald Coast tour event at Bay Point by one shot over Glenn Northcutt. Strohmeyer started the day one stroke back of Northcutt after rounds of 72-73. His 2 over par 38 on the front nine and a bogey on 10 left him 5 strokes behind with 6 holes to go. After a birdie on 12 and 4 straight from 14 to 17 gave him a 32 on the back nine and 70 total to put him one ahead of Northcutt going into the final hole. Both made par on 18 and Strohmeyer claimed his first victory of the year.

Chase Seifert finished third after a final round 71 to finish at 219.

Thanks to Nate Starr for his help with the event. 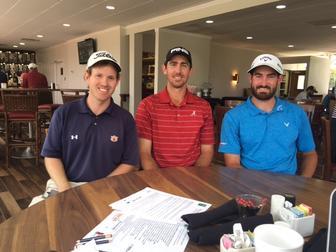