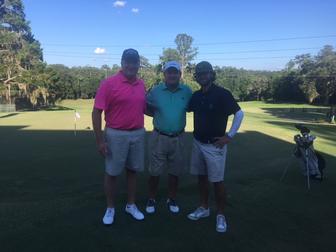 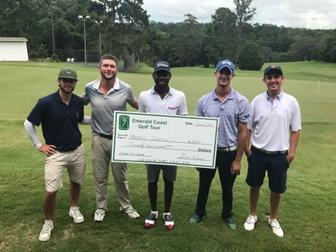 Kamaiu Johnson hung on to win the Emerald Coast tour event at Capital City Country Club. His 69-70-67-206 was just good enough to beat Andrew Beckler by two strokes. Beckler who goes to school at Kansas State University finished at 208 after a final round of 68. Johnson who is a Tallahassee native had a 33 on the back nine as he and Beckler were tight all day long. Johnson won $2500 for his victory. Spencer Smith from nearby Crawfordville FL, was playing in his first Emerald Coast tour event finished third at 214. Brady Hollenbacher of Fleming Island FL was fourth at 220 after rounds of 74-70-76. Kyle Sapp who shared the first round lead with Johnson finished fifth at 221 after a final round 75.

The Pro Am was won by Spencer Smith Larry Tromley Mike Abate and Michael Spinks.

Much thanks to Larry Tromly and Capital City for hosting the event. The course was in great shape. Also much thanks to our sponsors Marcus Beck Sam Childers and Tyler Woolson for hosting a great party at Fox & Stag for all the players on Thursday night.