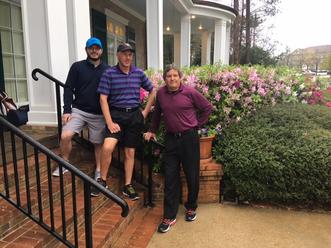 For the second week in a row we had  Co Champions in the first two events on the Emerald Coast tour. Michael Hebert and Carson Jacobs both shot 10 under par 2016 to tie in the Emerald Coast tour event at Dancing Rabbit. Rather than a playoff they decided to split the winnings. Michael Hebert was also a winner at Kiva Dunes two weeks ago. This was Carson  Jacobs first professional win. They each won $4750.

After a rain delay starting the final round Hebert had a two stroke lead over Jacobs. He maintained that that two shot cushion going into the last hole. After a final hole double bogie Hebert and Jacobs finished tied for the 54 hole lead. Jacob Harper finished third at 209. Hunter Stewart was fourth at 210.

The Pro Am was won by Kyle Sapp Russell Smith, Jason Hill and Bill Powis

Thanks to Dancing Rabbit for hosting the event. 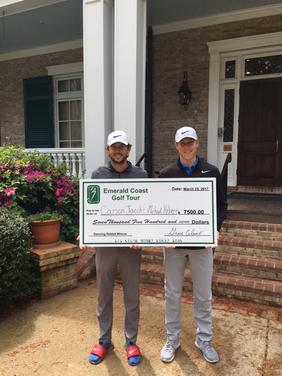