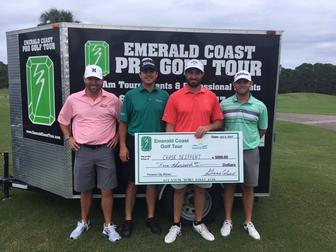 Chase Seiffert was on his game this week. His three rounds of 68-67-67-202 was good for a 5 shot win over Jacob Harper and Wade Binfield as they finished at 207.  Seiffert started the day with a two shot lead over Binfield but after the turn the lead was down to one. Seiffert was solid on the back nine with a 33 and finished with a eagle on the final hole for the five shot win. Jacob Harper had the low round of the day with a final round 66 to tie Binfield. Nick Rousey finished fourth after a final round 67 and a 210 total. Glenn Northcutt and Jake Tucker tied for fifth at 213.

This was the first win of the season by Seiffert who has had three second place finishes this year on the EGCT tour. Seiffert has also split time playing in some PGA tour events this years.

This was a great victory for him in his home town of Panama City Beach. The win also moved him to second place on the season money list.

The Pro Am was won by Wade Binfield and Rick Hill and Rick Baumann. Thanks to Brad Carroll and the Holiday golf club for hosting the event. 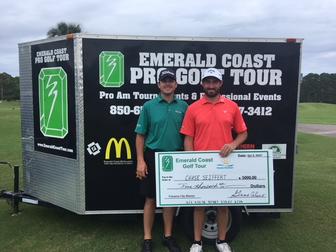