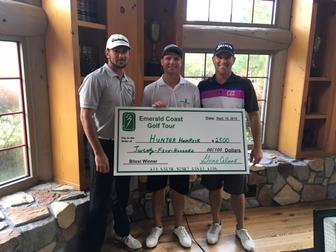 Hunter Hamrick was rock solid in his first round shooting a 66 at the Grand Bear Golf Club in Saucier MS. He started the final round with a two stroke lead over Zach Portemont and Michael Arnaud. Hamrick stayed hot in the second round as he shot a five under 31 on the front to take a five shot leading heading into the back nine over Portemont. On the back nine Portemont was playing well and closed the gap to two strokes with three to play. Hamrick would birdie the par 3 16th and would hold on for a three shot win over Portemont who shot a final round 67 and finish at 135. Hamrick had a final round 66 to finish at 132. Michael Arnaud shot a final round 70 to finish third at 138. Arnaud who is from Mandeville La, won earlier in the year on the Web. Com tour in South Carolina. There was a three way tie at 139 which included Jake Tucker, Jacob Harper and Web.com tour player Nick Rousey.

There was no pro Am this week due to Tropical storm Gordon. Thanks to Ian at Grand Bear for hosting the event.

Thanks to the Scarlet Pearl for their great food.​