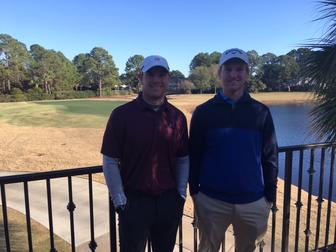 ​Mahlik Braves the Cold to Win at the Hombre!

Alex Mahlik got his first professional victory in the first event of the year on the Emerald Coast Golf tour winter event. Mahlik who is from Madison Al was playing in his second Emerald Coast tour event. The tournament was held at the Hombre in Panama City Beach which is a great course and has hosted many PGA tour qualifying events. It was in great shape but as always the Hombre can jump up and bite you. It was one of the most difficult courses back when the PGA tour played there. Mahilik had rounds of 74-72-146 to win the event by one stroke over Jacob Harper. Harper was tied with Mahlik with a opening round of 72 but his second round 75 147 left him one stroke behind. He had a birdie putt on the last hole to tie Mahlik but it lipped out. Kirk Thomas of Bossier City LA  finished third at 149.