Doug Barron came out smoking in the First round of the Emerald Coast Tour event in Andalusia. He fired a 10 under par 62 to share the first round lead with Cam Norman who also shot 62. Barron stayed hot in the second round with a 64 to open a five shot lead over Norman who shot 69. Barron finished with a final round 67 to win by 7 over Norman. The victory was the third win of the year on the ECGT for Barron.  Norman is a past champion of the Andalusia event. Alejandro Tosti came in third at 207. Talin Rajendranath was fourth at 208. The Pro Am was won by Cam Norman. Tyler Dent Ashley Kilcrease and Trent Taylor 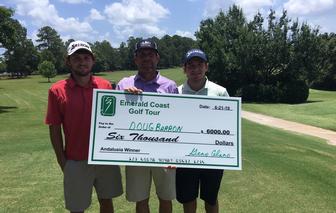