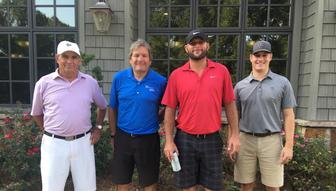 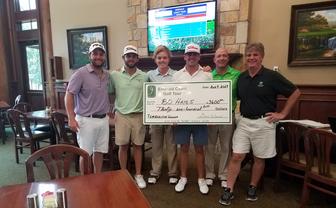 ​Bo Hayes Comes Back and Gets First Win at Timberline

Bo Hayes got his first professional win on the Emerald Coast Tour. He came from 5 strokes back of Jake Tucker to get the victory. Hayes who is from Gadsden AL is a former college player for Jacksonville St. He had rounds of 66-66-64-196 to get the win. It was one stroke off the tournament record set by Sam Love last year. Hayes started the final round 5 strokes behind Jacob Tucker after Tucker had had 65-62 in the first two rounds. Hayes got off to a great start in the final round as he birdied four of the first five holes to get with in one stroke of the lead. Hayes would take the lead on number 11 after a double eagle 2 on the par five. It was his first double eagle ever.  He would take a two shot lead over Tucker heading into the final hole but ran in a little trouble. He would hit his tee shot in the hazard and have to take a drop. After punching it thru the trees he would end up making a great bogey.  Tucker just missed this birdie to tie and force a playoff. It was another great week for Tucker but a tough loss as he lost in a playoff the week before to Zack Pritchett. Casey O’Toole  of Oneota AL finished third at 203. Local Timberline favorite Connor Slane  finished fourth at 204.

The Pro Am was won by Kyle Sapp and Evan Adams, Russell Smith and Evan Sawyer

Much thanks to Joe Kruse and the entire staff at Timberline for their hospitality during the event. The course was in great shape. 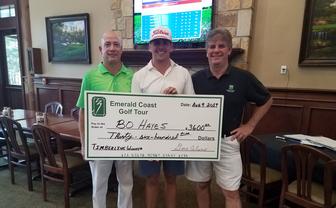