All three teams tied at 192 (24 under par in the team format which was a scramble Modified Alt/Shot and best ball. Petefish and Williams who have both won on the Emerald Coast Tour as individuals had a 4 stroke lead starting the last round. A final round 62 by Fly and Barron and a 64 by Durant and Parel enabled them to make up some ground on the last day. The event was held at Eglin Golf Course in Niceville FL on the Falcon and Eagle courses. Rocky Cleland and Jamie Taylor finish fourth at 193 just one stroke back.

Congrats to all the players. A special thanks to Eric Wilson and the staff at Eglin for their help with the event. 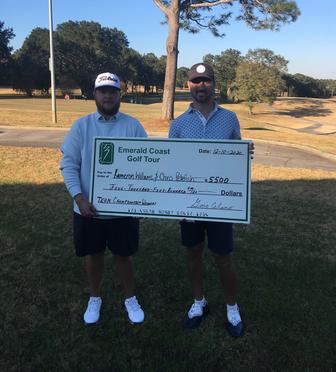