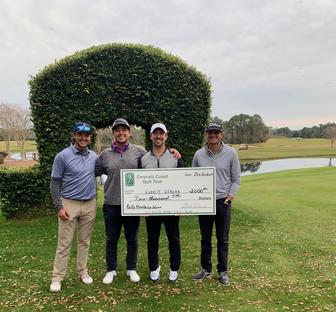 Garrett Osborn fired a course record 64 at  Kelly Plantation on the final round to win the Emerald Coast Golf Tour winter event at Kelly Plantation. Osborn open the event with a 68 to take the first round lead. His second round 73 put him in second going into the final round. Kane Whitehurst had the second round lead after a 70-69-139. His final round 70 was good for second place. Whitehurst and Osborn were having a battle but a triple bogey on 16 was the difference in the tournament. Chase Knox finished third at 212 to earn his first Emerald Coast tour check. Neal Ajubita was fourth at 215

Caleb Maraman was the low amateur at 214.

Next up is Marcus Pointe Feb 5-6