​Stephen Shepard got his first win on the Emerald Coast Golf Pro Golf tour at regatta Bay in Destin FL. It was his second professional win of his young career. He led the tournament from start to finish as he had rounds of 70 70-69-209. He tied with Kane Whitehurst of Duluth GA who had rounds of 71-70-68. They went two holes in the playoff as both of them birdied the first. On the par 4 second Whitehurst would miss a three footer to give Shepard the win.

Some great scores by both players as the weather was quite cold the first day.  Neal Ajubita of New Orleans LA finished third at 214. Zack Pritchett of Ripley MS was fourth at 220. Thanks to Regatta Bay for hosting the event.

Next up Kelly Plantation 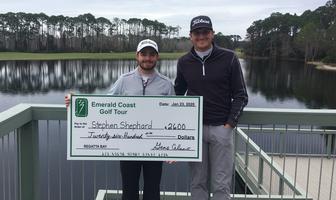