Luke Wilson of Cullman AL got his first professional victory in the Emerald Coast Tour event at Windance in Gulfport MS. The Cullman native just turned pro in May and played Collegiate golf at the University of Montavallo. After not having a lot of success this summer on the tour, he put it all together this week. He had rounds of 69-67-70-206 to win by three shots over Casey Fernandez of Durant OK. He started the final round three strokes over Fernandez and increased the lead to 8 shots after nine holes after a front nine of 32 as Fernandez was one over at the turn. Fernandez shot three under on the back as Wilson Struggled and shot 38 to win by three. Leading by three It got a little interesting on the last hole as Wilson hit his tee shot out of bounds. His second tee shot was almost out as well. Then Wilson holed his second shot from 164 yards out for a par to clinch the win and the 3 shot victory. Steven Setterstrrom of Mobile AL had a final round 69 and fished third at 213. Hayes Weatherby of Hattiesburg MS was fourth at 216.

The Pro Am was won by Luke Wilson Josh O’Neal  Stephen Parker and Ryys Battles.

Thanks to Rory Nelson and Windance for hosting the event as the course was great. 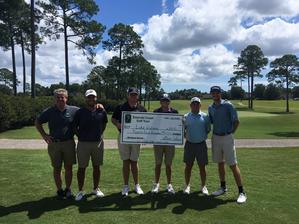