Michael Arnaud got his first win of the year on the Emerald Coast Tour winter event at Hidden Creek. The Covington LA native shot rounds of 69-71-72-212 to win by two stroke over Zach Portemont. Arnaud has status on the Korn Ferry Tour, took had a two shot lead going into the final round over. He played just good enough to get his fourth win on the Emerald Coast Tour. He won the Dothan Classic last year. Portemont who is from Andalusia AL had rounds of 73-70-71-214, Blake Caldwell and Jacob Harper and Brooks Rabren tied for third at 215. Rabren who is also from Andalusia AL had the low round of the tournament on the final round with a four under 68.

Thanks to Hidden creek for hosting the event.

Congrats to Michael Arnaud for
winning at Hidden Creek! 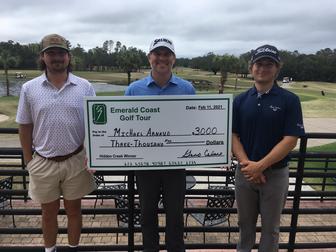