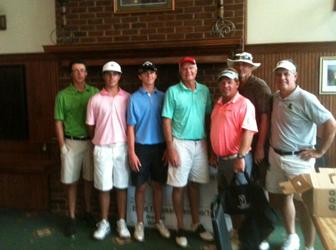 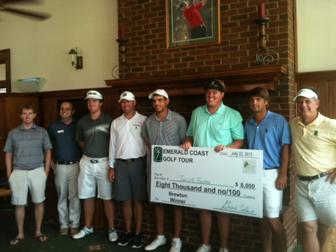 ​​​Jacob Harper was playing in his first Emerald Coast tour event but played like a seasoned veteran. He opened the tournament with a 71 but followed that up with a 68 and a final round 63 to win his first professional event. After shooting a 33 on the front nine he blistered the back nine shooting a six under 30. The victory was worth $8000 to Harper who is from Valley AL. His final round over took first and second round leader Tyler Klava who finished two back at 204. Klava is from Pace FL and just finished school at South Alabama. Nick Rousey of Pensacola FL finished third at 206. Four players tied at 208 which included Jay McLuen, Glenn Northcutt, Phillip Brennan and Bobby Wyatt.

Scott Strohmeyer and Brandon Jowers finished in a tie for 8th.

The Pro Am was tied by two teams at 125. They split the Pro Am and were CO Champions. The first team was Jack Slocum; Danny Nowell; Gary Caperton and Brad Byrne. The other team was Blaise Wilson; Joey Turner, Dylan Mouton and Grant Goforth.

The Country Club was in great shape and the players loved the course. Thanks to Matt Livengood and the entire staff at the Club for their help with the event.

Much thanks to Tom McMillan and all the sponsors in Brewton  who made this event a huge success.

Harper has Great Final Round to Win in Brewton!!!