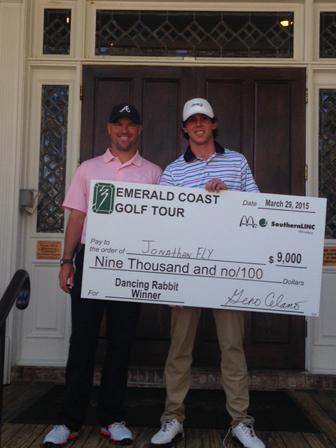 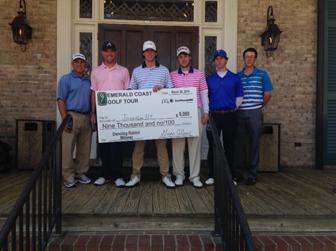 Jonathan Fly is the 2015 champion in the Emerald Coast Tour spring event at Dancing Rabbit. Fly had an opening round of 66 to take as one shot lead over Wilson McDonald. His second round 68 gave him a five shot lead over McDonald heading into the final round. His final round 72-206 was just good enough for a two shot win over Nick Rousey who finished at 208. Rousey is a two time champion of this event and had a final round of 68 to put the pressure on Fly.

McDonald finished third at 211. Scott Parel from the web.com tour had a nice final round 69 and finished fourth at 213. Kevin Brady picked up his fort Emerald Coast check as he finished tied for fifth at 215 with Parker McLauchlin. Blaise Wilson and Glenn Northcutt tied for 7th. Northcutt had previously won this event the last two years.​

The Pro Am was won by Kyle Sapp and Russell Smith, Jason Hill and MCay Lyvers.