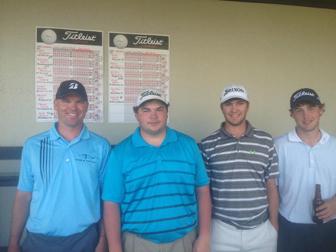 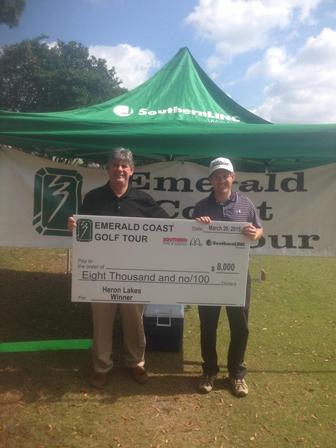 Glenn Northcutt fired a final round 67 to win the season opening event at Heron Lakes. His three round total of 204 was good enough for a 4 shot win over local favorite Wilson McDonald. McDonald had a final round 67 and finished at 208. Northcutt who is from Dothan AL finished second on the Emerald Coast Tour money list last year. Nick Rousey who won the money title last year was the 36 hole leader at 8 under par after opening up with 68-68-136. After a 2 under par 34 on the front nine Rousey shot 39 on the back nine which included a triple bogie on number 10. He would end up tying for third with at 209 with Hunter Hawkins. Hawkins had rounds of 71-67-71. Brandon Godwin of Montgomery Al finished fifth at 210.

Thanks to Jimmy Green and Brooks Lee for the hospitality at Heron Lakes.

This was an extremely difficult event for many of the players from the passing of David Miller. David was a past champion and regular on the Emerald Coast tour and will be missed by all of us, but not forgotten. Our thoughts and prayers go out to the entire Miller family.